The Logic of the Free Market in China 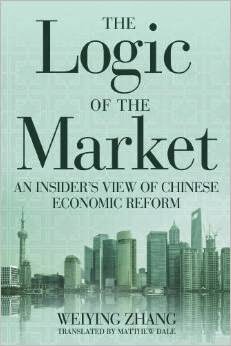 I sometimes encounter a particular version of “cultural relativism” which asserts that the benefits of free markets are culturally specific. For example, I am told that cultures that are more collectivist in nature do not react well to the kind of American individualism that we are used to, and that different cultures need to develop their own kind of open-market society, some that are necessarily more “community oriented” than ours; and that such constraints will not limit their economic growth and development.

About to be published in January 2015 is the second edition of the English translation of an amazing book by the Chinese economist Weiying Zhang that gives the lie to this perspective. It is aptly entitled The Logicof the Market and its English version subtitle is An Insider’s View of Chinese Economic Reform. The message is simple - the logic of the market is universal. Yes, it has its particular expression in different cultures, but, its basic logic is the same for all people always and everywhere.

Zhang’s exposition is, in a word, “beautiful”. His simple but elegant style comes through in the translation as he weaves simple, intuitive truths together with profound insights into the miraculous working of the market process, drawing equally and effortlessly form the likes of Adam Smith and Confucius. The book is full of examples from contemporary and historical Chinese thought and experience. Its potential audience is thus enormous, including readers all over the world. For someone like me, teaching economics to Chinese students studying business in America, it is an invaluable resource. I am going to recommend to them that they buy both the English and Chinese versions, and thereby improve both their English and their economics.

The content is wide in scope. After an expansive introduction (added to this edition and worth reading by itself if that is the only part of the book you have time to read), the book is divided into four parts. Part one, “the nature of the market” is a comprehensive statement of the workings of the market process – the explanation behind the astounding economic developments of the last 200 years in the West and the last 30 years in China. Zhang tackles head-on the relationship between market and morality. He makes no apologies. The market is simply the most efficient and the most moral of social systems, the most compassionate and democratic. The market is a property-based system. China’s predominant historical experience has been with position-based systems. Position-based systems are inefficient and privilege those with social status to the detriment of the rest of society. China’s state-based system is a class-based system. He warns against the ominous anti-market sentiment that has lately developed in China. By way of numerous illustrations Zhang covers labor markets, housing markets, anti-trust, and much more.

In part two “the logic of China’s reform” Zhang examines in more detail the nuances of the transition that China has experienced in the last generation and emphasizes the need to maintain the momentum towards greater freedom. Part three looks at “the origins of the financial crisis” in which he examines the logic and illogic of much of macroeconomic thinking and the dangers of China’s Keynesian response to the crisis.  Part four ends the book with “the prospect of China’s future”.

Zhang is clearly worried, if not pessimistic. Given the prominence of China in the world economy today, his concerns should be our concerns. Somewhat controversially perhaps, he believes that the role of economists everywhere is to understand and safeguard the market economy. And with this book he has certainly made it a lot easier for those who wish to adopt this mission.

Posted by Against the Current at 11:27 AM No comments: Links to this post

In this blog I will be addressing mainly interested lay people (non-economists) about the issues of the day; venting my frustrations and hopefully providing more in-depth analysis than is typically available in the popular press.

Spanish Word of the Day